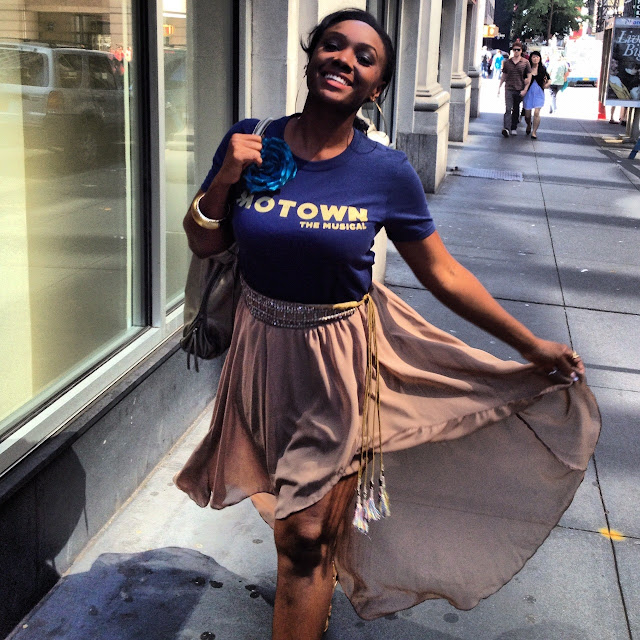 “Get Ready” cause here we come! Motown the musical is on its way. I was so excited to see our images on the jumbo tron in the middle of Times Square! We took a full day’s rehearsal to put together a live performance featuring many who will be in the Motown Broadway show. Just before beginning the final *lab before Broadway rehearsals begin in January a large group of us were invited to perform at the annual Broadway on Broadway event that highlights current and upcoming Broadway shows to see. Armed with a box of Navy Blue t-shirts with antique gold writing, our stage manager Julia gave us the basis for our costumes for that day. We all paired out shirts (which we were told NOT to cut/shred) with jeans, pants, boots, shorts and skirts to add the wow factor. I paired mine with a khaki-gold skirt on trend with the high to low flowiness, a sparkly belt with tassels, and against my podiatrist’s recommendations, sparkly golden stilettos! Topped off with a rose and a ponytail with wavy bangs! I was no match for the sparkly warm golden pietted pants and super coif worn by the fabulous, Valisia Lekae, whose Diana Ross, will be the show stopper you must all come to see this spring! We were all so happy and excited! There’s lots to do to get ready for gig like this. A lot goes into putting up a Broadway show especially one that is based on so many real life figures, time, effort, sacrifice, and work but we love our work that’s why we do it! I’ve included some cute pics from the day, and a link to the performance below! Enjoy! 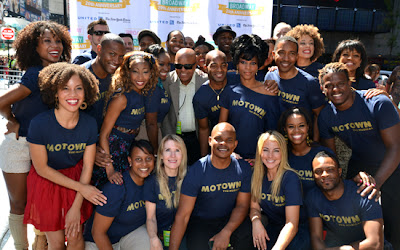 *lab- is a rehearsal period used by the producers/writer/director to see actors performing the material sort of like a demonstration to help decide on changes that need to occur before ultimate mount of the show happens.

1 thought on “Saycon Sengbloh: Motown the musical at Broadway on Broadway”