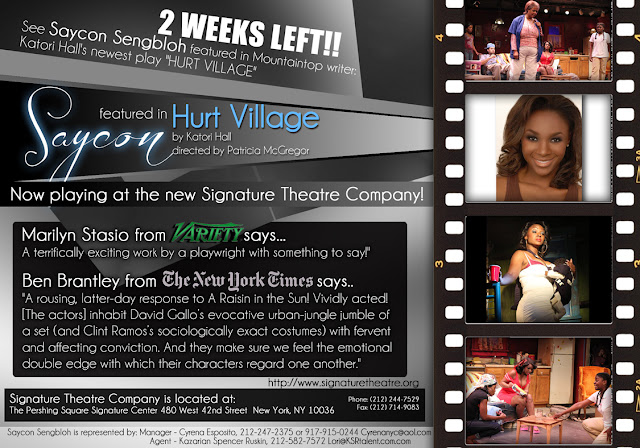 Come see Saycon Sengbloh in Hurt Village! I’m so excited to tell everyone about the new daring and extraordinary piece by Katori Hall. I’m thrilled to be a part of this show at the New Signature theatre. The language and characters in Hurt Village  are something that has not been seen on the American theatrical landscape in a very long time perhaps since Melvin Van Peeple’s Ain’t Supposed to Die a Natural Death, or Lorraine Hansberry’s A Raisin in the Sun. Hurt Village is not a musical though the musical influence of hip-hop pulses through the veins of this ghetto story set in Memphis, Tennessee. I’m playing the role of Toyia a girl who works at the local “shake junt” and is fiercely protective of her man, her body, and her baby. With costumes by Clint Ramos I’m having a ball wearing clothes from all of hip-hop’s fashion moguls (Sean John, Fetish, an House of Dereon). And sharing a stage with New York’s hottest up and coming talents, like Lloyd Watts, Charlie Hudson III,  Marsha Stephanie Blake, Nicholas Christopher, Corey Hawkins, Ron Cephas Jones, Joaquina Kalukango , and Tony award winner Tonya Pinkins directed by Patricia McGregor! Choreography by Daniel Price. Come out and witness this new work!

Check out some of the reviews below:

“Five Stars! Exceptional! This is theatre that throbs with life, and quickens the pulse and mind!”

“A rousing, latter-day response to A Raisin in the Sun! Vividly acted! [The actors] inhabit David Gallo’s evocative urban-jungle jumble of a set (and Clint Ramos’s sociologically exact costumes) with fervent and affecting conviction. And they make sure we feel the emotional double edge with which their characters regard one another.”

“A terrifically exciting work by a playwright with something to say!”

“Thoroughly sensational! Obligatory viewing! Under direction by Patricia McGregor as fierce as Katori Hall’s writing, the cast makes a strong bid for a best-ensemble prize!”

“Makes you stand up and pay attention!”