Buzz! Buzz! Buzz! We are counting down the days until Motown rehearsal starts! And with the buzzzz we’re keeping it going with the several artists from the cast of Motown glowing and showin’ out in NYC!  What a treat to have yet another rising star in our midst! I’m talking about Morgan James. This soulful young lady has come on the scene with a steady burn and I’ve watched her rise, working hard as an indie musician ( love it), singing her face off, and reaching the epitome of music fire securing a dream deal with Epic records.

I’m  gonna be there to support her I’m sure lots of Motown cast members will be in tow! Will you be there? 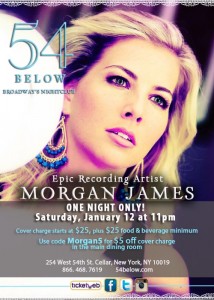