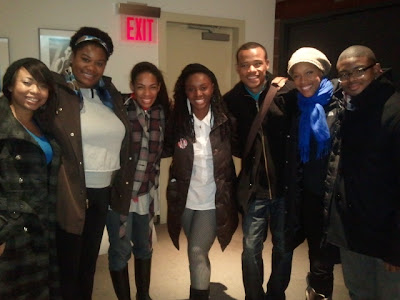 Milk like sugar! Milk, milk like sugar! Finally, I got out of the house and saw the show. You know how it is when you’re waiting on something, waiting for time, waiting for people, waiting for money, just waiting to go see a show and somehow you forget because life sort of takes over and then you turn around and the show has closed already! Well that didn’t happen to me, on a whim I called my friend Nicole and we went out to see Milk Like Sugar. Tickets were available we made it happen. I’m shown above with the the cast. If you don’t know, the show written by Kirsten Greenidge, is a play about a trio of young ladies who decide to make a pact to have babies while still in highschool, the young men and friends, and mother involved in their lives . I took in this show that was deeply anxious inspired by true events and well acted by friends and cohorts. Starring the lovely Angela Lewis, Cherise Boothe and Nikiya Mathis as the three naive and scheming teenagers along with young men J. Mallory-McCree, LeRoy McClain, and the awkward friend played by Adrienne C. Moore. Milk Like Sugar is a small play that makes a big statement, its truly exciting to see all this young talent onstage and to witness the hard working cigarette smoking genius of the exquisite Tonya Pinkins as the matriarch of the piece.. On a side note my good friend and “Hair” revival cohort, Nicole Lewis and I happily found ourselves seated behind Heidi Griffiths and the ever smiling Jordan Thaler, the casting directors for the NY Public theater. They looked on us with the twinkling eyes of proud parents as the 4 of us reminisced on how casting a little 3 day 40th anniversary “Hair”concert lead to Tony award winning stint on Broadway , London and a National tour. Our memory was cut short when the lights dimmed and sound of Beyonce “Run the World Girls” theme started pumping from the speakers as the 3 highschool divas in training started us on a journey. I enjoyed the show having recently read another play by the author, and I look forward to more of her work!
Peace ya’ll,
Saycon
ps- I’ve begun working on a new online boutique full of fun items to raise funds for upcoming projects look out for them and the launch of a new youtube page dedicated to all the people who’ve been bitten by the theater bug!