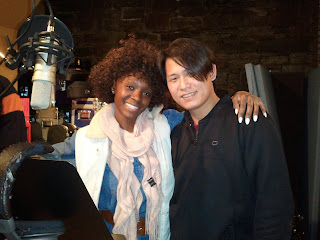 I hit the studio the other day to record a demo for songwriting team Thomson and Mann! That’s Jeff Thomson and Jordan Mann along with drummer and engineer Robin Lai photographed above. They’re a couple of great guys who are doing some beautiful work. We recorded a spec song for a new Disney film called ‘African Cats”! I hope it gets picked up and I got my fingers crossed. Meanwhile in between talking to my Mom, spending time with my boyfriend, and catching up on sleep, Ive been writing a few songs of my own. I’m excited about the music, image, and expression that I’ll bust out with in 2011. More to come!
Saycon

1 thought on “In the Studio with Thomson & Mann”