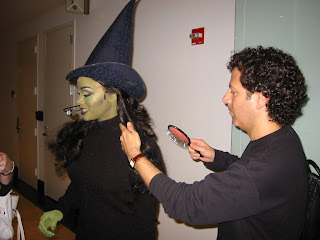 I’ve been floating on a cloud this week as I saw my country the United States of America show up in record numbers to vote for our President-Elect Barrack Obama! This FIRST, is one that astounds a nation which at one time supported slavery and Jim Crow. So many people of our nation were so emotional for so many reasons and we are reminded of so many FIRSTS that have happened in American popular culture: in music, sports, literature, science, architecture, and visual art. African-American FIRSTS in entertainment have been particularly inspiring to me: Halle Berry winning the Academy Award for Best Actress, Outcast as the first Hip-Hop group to win Record of the Year at the Grammy’s, Phylicia Rashad’s Best Actress in a Play Tony win, and my own personal first as the first black woman to perform Elphaba on Broadway: Saycon Sengbloh!

There have been dynamic FIRSTS in politics that continue to occur each year but this time was different. The office of the President of the United States of America, the identity of the First Family, seemed different! Because with so many negative representations of people of color presented, with advertisements that rarely use children of color or women of color as the American example somehow–outside of politics–this election has made many people who have doubted themselves feel “good enough”, feel “welcome”, feel “Yes We Can” be fully American. Yes, 42 years after the civil rights movement we are still in need of encouragement, boy has slavery done a dosey on our collective self esteem! Obama’s movement has made many people in this country feel:”Yes We Can” begin to get beyond the difficult parts of our history and let people know that we can look at people for who they are. And love them and respect them beyond the color of their skin!

I have gotten so many letters from girls and boys who were so excited and proud to see a Black woman performing one of their favorite characters, “Elphaba”, in the musical Wicked. I was in Wicked for nearly 2 and a half years and I learned so much during that time.. .it wasn’t always easy and I was so busy in my own experience of working at the Gershwin theatre that I didn’t truly imagine so many kids would be inspired. Oh, but the letters flew in, the artwork the fan sites, all the love that said “We’re so proud of you!” and “We can do it too!” I found out over the years that these things have meant alot to young people of color. Barack and Michelle Obama have inspired us all and I hope to inspire in the way that they have! God bless America!

Hey hey hey!!! Many thanks for the love! Repost fr

What an exciting week! In more ways than one!! An

We had an amazing music moment on the Wonder Years