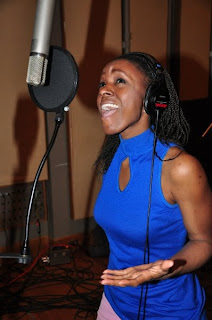 Finally, the Broadway cast of Fela! has begun recording the soundtrack to the show! After a long week of performances, we headed into the studio on our show night off to lay the vocals and live band music of the Fela!. Soon people will be able to purchase our versions of some of the most exciting songs composed by Fela Kuti! Pretty exciting, since last year I had the great opportunity to record what would end up the Grammy nominated soundtrack for the Hair revival! The Fela album is to be released in June 2010!

copy/paste the link below to see pics:
http://www.broadwayworld.com/article/Photo_Coverage_FELA_Cast_Records_Cast_Album_20100310