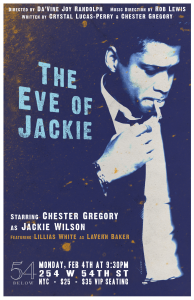 On New Years Day I ran into my friend Chester at an after hours breakfast party. We got to talking about music and gigs as we always do: good conversation, good times, potatoes were sizzlin’ on the griddle. Chester keeps the music going. So I couldn’t wait to tell you guys about his upcoming show at 54 Below on February 4th. Even at 5 in the morning, he was buzzing about his collaboration with director Da’Vine Joy Randolph, musical director Rob Lewis  and his co-writer Crystal Lucas-Perry! Chester Gregory is arguably one of the most gifted vocalists in the NYC, so I urge you to check him out if you never seen him live before. Many may have seen him recently in Broadway’s Sister Act or in one of my favorite roles, as Jimmy Early in Dreamgirls with Syesha Mercado, but his live show is definitely something to behold. With a solid and dedicated fan base, he’s got the look,  he’s knows music, and has his own brand of R&B soul . I see him as a sort of kindred spirit in music, like my friend Christine Horn too, always striving with an independent and entrepreneurial spirit. Doing the acting thing yet always being called back by the music. Delightfully we also get to see the fabulous Lillias White in a special turn as “LaVerne Baker”. I heard about the Jackie Wilson show he did a while back and never had a chance to see it so I’m looking forward to witnessing this new look at the legend. Fashion styled and costumed by the fashion master himself, Carl Ulysses I’m excited to see the look and learn more about Jackie Wilson. Ironically, on the Motown front, Jackie Wilson was one of the first artists Berry Gordy wrote songs for in his early years in the music industry. “Too Be Loved” written by Berry Gordy is one of Jackie Wilson’s classics.

SayconTalks readers and those with this link can get a discount on on ticket purchases. Using the code: Chester5

Chester Gregory (Sister Act, Hairspray) reprises his award winning interpretation of Jackie Wilson in the world premiere of his one man show , “The Eve of Jackie” at 54 Below on February 4th at 9:30PM.

Gregory portrays Jackie Wilson, live in concert during his final days, revealing  another side to the man “who truly gave his all and left it on the stage.”

THE EVE OF JACKIE WILSON: